A family corporation was formed and the boys joined their father and mother to once again rebuild the business and plant operations. They again rebuilt a state of the art State Inspected plant with computerized smokehouses and wrapping machines as well as a complete new shipping department. Edward & Joyce Vinklarek had eight  children. All of which were raised in the sausage business and have a genuine love and interest in the company. V&V can be found in neighborhood grocery stores as well as Bar B Que restaurants throughout Central and South Texas including the Dallas area up north and Midland out west. Presently, V&V still has the same recipe and family love and excitement started more than 55 years ago. Edward passed away in 1996 and his wife, Joyce, passed away in February, 2006 but the children still hold their parents company close in their heart. Their children have vowed to keep V&V just like their dad did.

On May 24, 1957, Alfonse sold his part to Edward who operated the business as a sole proprietorship until 1970 when Edward took on Robert Rietz, a company salesman, as a partner. The business was once again expanded and a new plant was built to meet the State Health Department requirements equivalent to USDA.

A Grand Opening of the new facility was held in February, 1971 with a very large, astounding attendance. Delivery routes were extended to Seguin, to Houston and Galveston, Bastrop to Corpus Christi and Kingsville. Donnie Vinklarek, Edward's son, joined the company over 40 years ago at the age of 17 and immediately took over and still heads Plant Operations. Ronnie Vinklarek , another of Edward's sons, joined the company in the fall of 1976 working in the plant and doing outside sales. Edward's oldest son, Bobby Vinklarek, joined the company in 1975 as a salesman and maintenance worker. Robert Rietz sold out to Edward and Edward again began operating as a sole proprietor.

The business continued to prosper landing larger and larger accounts until the terrible Tuesday, June 28, 1988. The plant burned to the ground on the historic buildings 100th Anniversary. The fire wiped out 33 years of Vinklarek Family work and dreams. All that remained that night were memories and THE EYES OF TEXAS recording of the sausage plant and its little community of Cistern where the Vinklarek family lived and worked. At that time, Edward decided to retire and left the insurance proceeds to rebuild. Suzanne Vinklarek Williams joined the company part time to manage the accounting duties.

Locally Owned & Operated by the Vinklarek Family Since 1955 in Cistern, Texas

V&V Sausage Company began in 1955 when Edward Vinklarek and Alphonse Vinklarek began making pork sausage from a family recipe in a shop on the farm near Cistern, Texas. Thus the name V&V was founded. They sold the sausage to neighboring grocery stores. In the fall of 1956, they rented the old General Store and Post Office Building in Cistern and setup a processing kitchen in the back of the building. 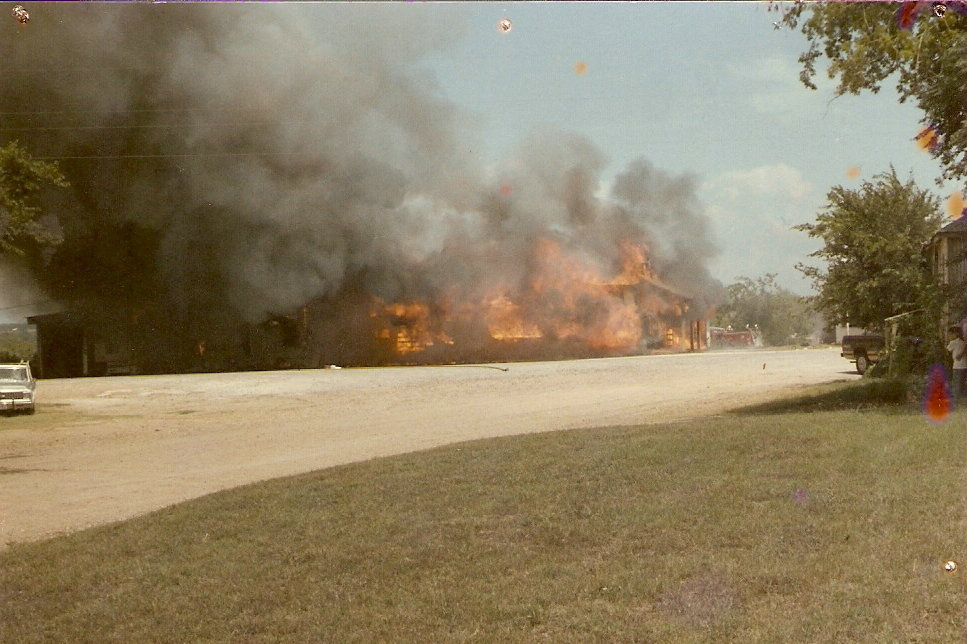 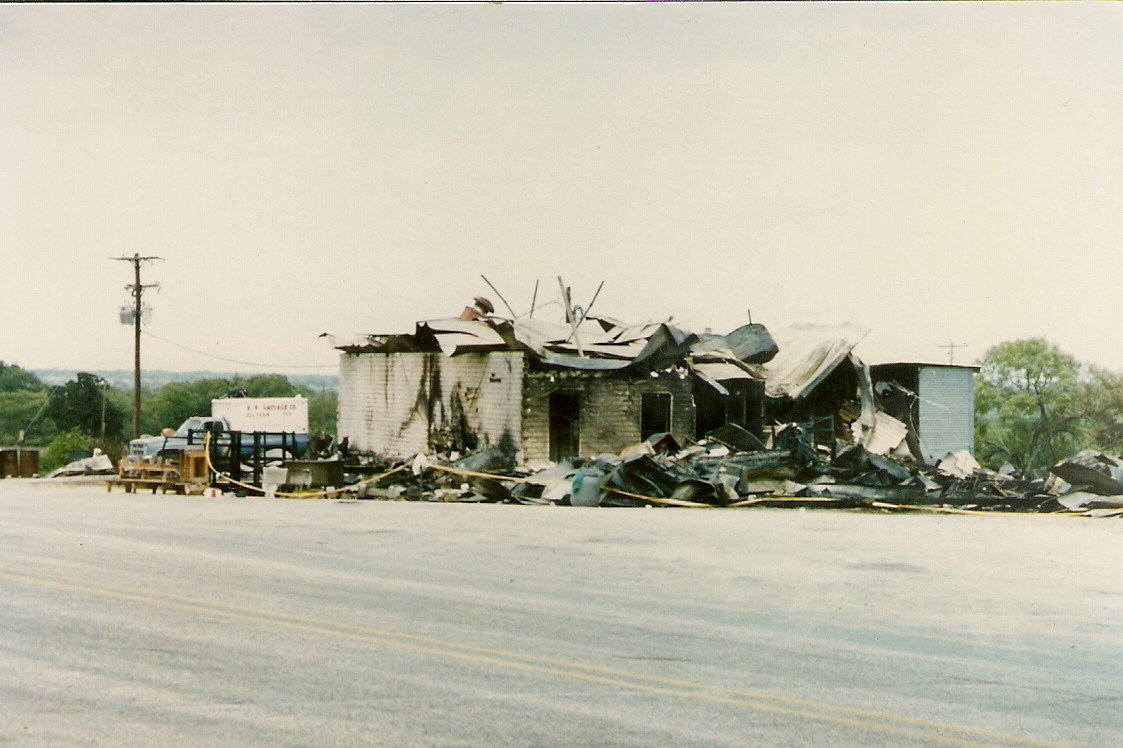 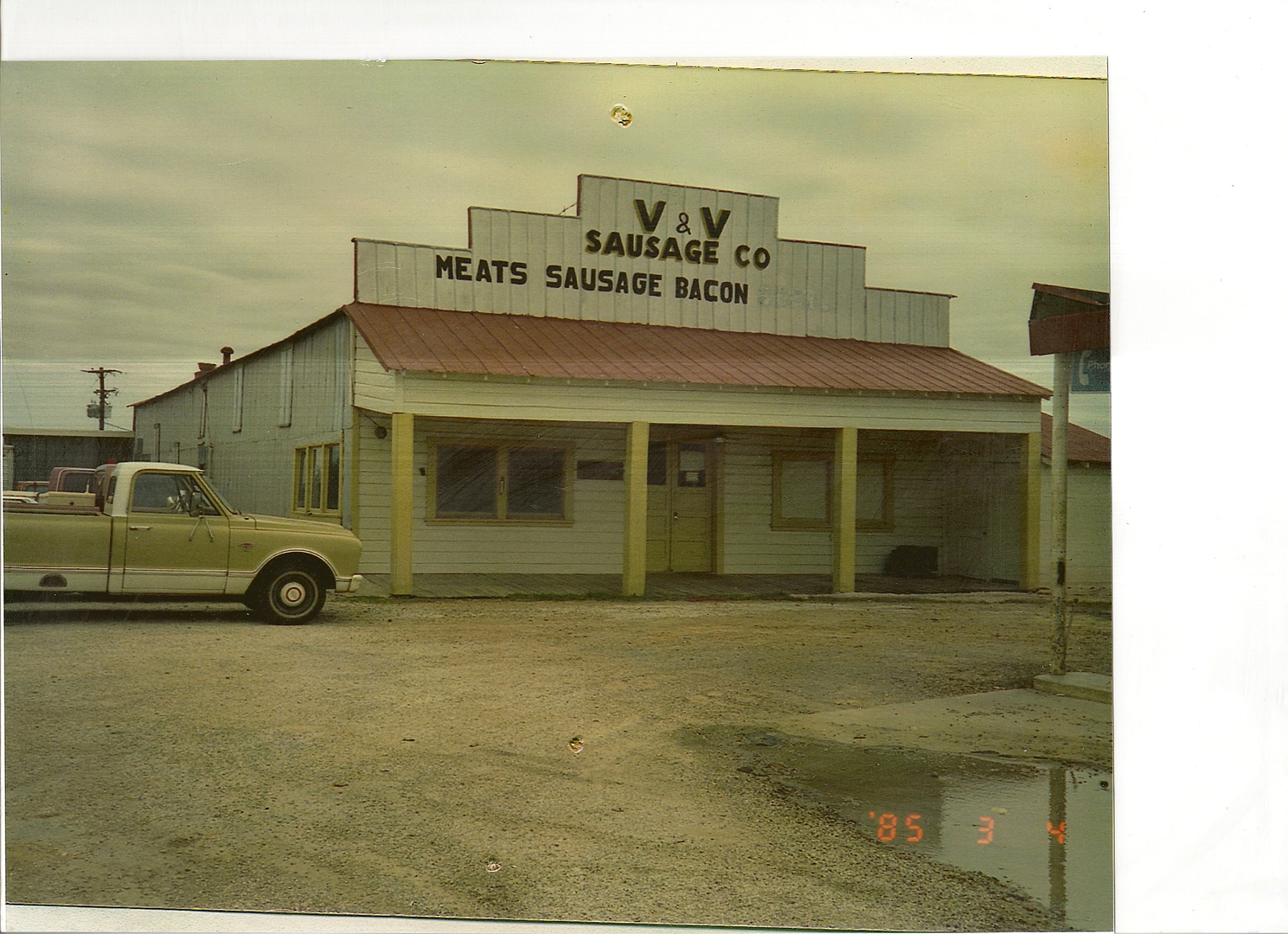 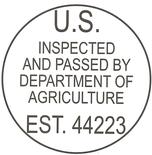 SINCE 1955 AND STILL SMOK'IN
View on Mobile